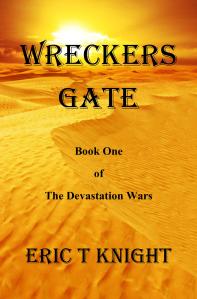 And there was the fear of Dirty Henry.
Kids he caught were never seen again. He wrapped them up in his black greatcoat and hauled them off to the Pits and what he did with them no one ever knew, though they spent many nights huddled around their little fires talking about it, scaring themselves and each other with every shadow thrown by the flames.
Once Quyloc and two other boys – he couldn’t remember their names now – ventured down to the Pits in the daytime and saw one of Dirty Henry’s victims. It was Spit, a tough, wiry kid who talked constantly and was quick with his fists. What was left of him didn’t look so tough. His own mother, had she still been alive, wouldn’t have recognized him. Wouldn’t have taken his body into her arms, that was for sure.
Then came the night Quyloc got caught out late. He’d gotten some legitimate work, helping a man unload manure for his gardens. As the sun dipped down he’d begged the man to let him go, but the man told him he wouldn’t pay for less than a full day’s work and Quyloc badly wanted that copper.
Free at last, he ran down dark alleys, empty except for snarling dogs and the occasional slumped shape of a passed-out drunk. He was small, but he was quick, and he was smart. He knew how to stay to the shadows and he knew how to squirm away from reaching hands. He could make it back to the dubious shelter of the Warrens if he was lucky.
He almost did.
It was the fireworks that betrayed him. A celebration was going on up on the hill, where the nobles lived. The first shell went up and he stopped to watch, enraptured as always by the colorful lights. He was almost home, only a few blocks from the Warrens. Surely he was safe, just for the moment. With one hand on the corner of the wall he turned back to watch the colored lights explode and slowly fade away. He wondered about the children up there who watched the same lights he did. He wondered if they went to bed afraid every night. If it was even possible to not be afraid. It was something he could not even imagine.
Then the hand clamped down on his wrist and he remembered his own fear. He knew instantly who it was, but no matter how he twisted or fought, it would not let go. He was pulled in to the stinking, rotting face, staring in horror at the one remaining eye of Dirty Henry.
Wreckers Gate, book one of The Devastation Wars
read Part 1 here