Watching the End of the World – Chapter 19 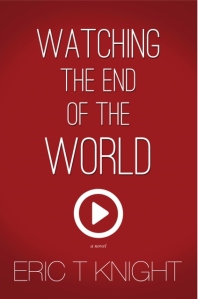 Nate climbed out onto the roof and realized he’d forgotten to bring his rifle. It was still down in the warehouse, leaning against a crate.
“It’s about time,” Tony said. “I thought you weren’t going to show.”
“Yeah…I got delayed.”
“Some new drama come up?”
Nate considered this. “You could say that.”
“Well, don’t tell me. I don’t want to know. I just want to go down and crawl into bed and pass out for about forty hours.” He started for the trap door.
“Can I borrow your rifle?”
Want the whole book? You can even name your own price!
“Where’s yours?”
“I forgot it in the warehouse. I don’t really feel like going back to get it.” Were Tamara and Caleb in the back now? Did she have those long legs wrapped around him? Nate’s palms felt sweaty.
Tony handed his rifle over.
“Don’t tell Akila.”
“Don’t worry about it. She scares me.” Tony stopped when he was halfway through the trap door. “I think I heard a lion.”
Nate thought of the big tree he’d seen growing up right next to the back of the warehouse. “They don’t climb trees do they?”
“How should I know? I guess so. They’re cats.”
He left and Nate was alone. In the dark. With lions. He wondered how many bullets it would take to stop a lion. How many rounds had Akila put in the clip? Was it five? He moved as far from the dark bulk of the tree as he could and sat down facing it, the rifle on his lap, pointing toward the tree, his finger on the safety.
Jenna woke him up a couple hours later, shining the light on her smartphone in his eyes. “You’re a terrible sentry,” she said.
“There’s lions,” was his excuse, as if that somehow made sense.
“You saw a lion?”
“No. But I heard one last night. And Tony said he heard one tonight. What are you doing up here? Didn’t you already do a watch today?”
“Santiago’s too drunk to stand. Jordynn had to help him to bed. And Caleb and Tamara are in one of the rooms fucking like there’s no tomorrow.” She sighed. “What the hell. There probably isn’t.”
It was hard to stand up. He’d gotten stiff, lying there. “How’s Omisha doing?” She and Jenna were sharing a room.
“She’s pretty messed up.”
“Aren’t we all?”
“True enough. Half the time I have to bite my lip just to keep from screaming.”
That surprised Nate. Jenna seemed the most solid of any of them, maybe even more than Akila. “I don’t really blame those guys for getting drunk,” Nate said. “I wish I was more of a drinker.”
“I don’t blame them for drinking either. I mean, when the end of the world comes, what else can you do but drink?”
“Then what…?”
“I blame them because watching them makes me want to drink and I can’t let that happen. I won’t give that bastard the satisfaction.”
“What bastard? Who are you talking about?”
“My father. He drank all the time. Who could blame him? His life was shit. He spent most of his life in Russia where drinking is more than a national pastime. When I was a kid I used to beg him to stop. One day – while he was drunk of course – he laughed at me and said I’d be a drunk just like him. I’d grow up and see what a pile of shit the world was and I’d do the only logical thing there was to do. I swore right then I’d never drink. That asshole is probably dead in a gutter somewhere, but on the off chance he’s still alive I’m going to make damned sure I never give him the chance to say I told you so.”
“Oh,” Nate said. He didn’t know what else to say. “Over at the back of the warehouse is a big tree. Be careful a lion doesn’t climb up it while you’re not watching.”
“Good advice. I’ll keep it in mind.”
Click here for the next chapter.
Click here to go to Chapter One.
Buy the book direct and name your price, or
Get it on Amazon.

Shares
Share This
We use cookies to ensure that we give you the best experience on our website. If you continue to use this site we will assume that you are happy with it.OkRead more