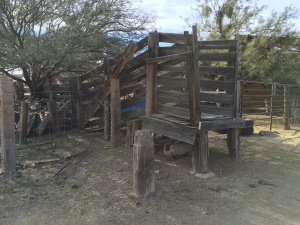 Time for the tale of how I earned a scar worthy of a champion.
In the early days, our lone piece of “heavy” equipment on the ranch was on old Ford tractor. I’m guessing that it was of a 1940s vintage, but without going to the trouble of emailing my sister for verification, I can’t be sure. So you’ll just have to take my word for it.
It wasn’t a big tractor, nor did it run very well, which meant that most time it had to be fixed before you could use it. That also meant that it fit right in with the rest of our rusty, crumbling, creaky equipment.
One of the tractor’s more entertaining traits was it complete and utter lack of functioning brakes. They were just useless metal appendages affixed down near your feet, fun to stomp on, but nothing else. If you wanted to stop, it was best to plan ahead. As in, Hey, there’s a gate coming up in about fifty yards. If I don’t want to crash through it, I better take action now. And, since the tractor had a top speed of about five miles an hour, fifty yards gave you plenty of time to take action.