Tales from Date Creek Ranch – An orchard in the middle of the desert? 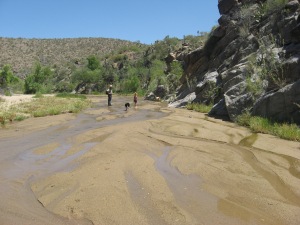 When I was a small child, Dad decided that it was time we got into the peach and apple business. You know, just in case we didn’t have enough work to do, what with five people to work 38,000 acres of land crisscrossed with rusted, sagging fences and skinny, belligerent cows. Though he knew nothing about orchards and nothing he’d learned in his few years of raising cattle had prepared him for the orchard business, that didn’t stop him. My father was not a man to let little things like inexperience or impracticality get in his way. He decided we must have an orchard and so an orchard we would have and damn the obstacles anyway. What could go wrong, anyway?

The ranch house, barns and corrals sit beside Date Creek, at a spot where the valley opens up a bit and the creek makes a large bend. Inside the bend lies twenty acres or so of flood-deposited bottomland. It’s good soil, soft and mostly rock-free, a complete contrast to the surrounding hillsides which are basically just piled rock with cactus poking up out of it everywhere.

Because of the creek, the water table is pretty high, less than a dozen feet even in summer, when the creek “dries up”, hiding underground while waiting for the rains and cooler weather to re-emerge.

That first orchard actually went pretty well. The trees thrived. About three quarters of the orchard was planted in peach trees, with the other quarter being apple trees, along with a few scattered plums, apricots and pears, for family consumption. Within a couple of years we were ready for business. The fruit was all pick-your-own, with most of our customers driving in from Phoenix. The most common response, as they got out of their cars and looked around, was astonishment that there actually was an apple and peach orchard way out in the middle of the desert.

And who could blame them? Where Highway 93 cuts through the ranch the land is open and flat. The most common plants out there are greasewood bushes—waist-high things with waxy leaves—along with Joshua trees, mesquite and saguaro cactus. It’s dry as an old bone, no hint of water anywhere. We had a small, hand-painted sign to tell them where to turn and then the plucky adventurer had four miles of rocky, rutted dirt road to traverse before arriving at the ranch house. I’ve often wondered how many of them turned back partway down our extended driveway, sure they had been duped and desperate to get back to civilization.

The peaches were ten cents a pound. The trees were still small enough that they were easy to care for. We even made some money. I remember celebrating when we had our first hundred dollar day, a good amount of money in the early ‘70s.

But then Dad started thinking bigger. Over the next few years we planted two more orchards. The second orchard, dubbed the creek orchard, was also planted alongside the creek, about a mile or so upstream from the house. It also consisted of apples and peaches. But that’s where the similarities to the house orchard ended.

The creek orchard was planted on two semi-flat sloped areas, but they were definitely not bottomland. This was desert proper. We cleared cactus and mesquite in plenty to prepare for the trees, but there was no way to clear out the rocks. The holes for the trees were dug using an auger attached to our ancient Ford tractor, which worked well enough for the house orchard, in that soft soil. In the new orchard, where the ground was primarily rocks and caliche (a type of clay that is about the consistency of stone and nearly impermeable to water), the auger didn’t work all that well. Most of the time we didn’t get down too far before striking some rock that was too big for the auger to pull up. Which meant that the hole had to be attacked with a digging bar (a long, metal bar about six foot long) and picks. The trick was to find the edge of the rock and try to get the bar under the edge so that it could be pried up (thus revealing yet more rocks beneath it).

Probably then would have been a good idea to reconsider the whole thing, but Dad had hundreds of saplings on hand and he was nothing if not persistent. After many delays, the orchard went in.

The problem was that the trees didn’t grow all that well in that poor soil. The ones closest to the creek did all right, but the further away ones were always scraggly. Aggravating the problem was the fact that the pump Dad bought to supply water to the trees (a new well was drilled specifically for this orchard) was too weak to provide enough water.

Somehow, though, the trees mostly lived and even began producing fruit. That’s when a new problem surfaced. The road leading to the creek orchard was absolute crap. A real axle-buster. And most of our customers showed up in cars. They’d drive up to the house and one of us kids would go greet them and explain that the fruit was actually at a different orchard. Then we’d hop in the car with them and guide them up there.

A fair number of those people did turn back. Or tried to. The road wound along the side of a pretty steep hill and giving up meant backing out. There was nowhere to turn around until you were practically back to the house.

Undaunted, Dad decided we needed a third orchard, what would come to be called the hill orchard. This one would be much larger, fifty acres (compared to 10 and 15 for the first two). It was also in a completely different location, on hilly land roughly halfway between the house and the highway and over a mile from the creek. It wasn’t a good place to drill a well so a pipeline had to be laid from the creek out to it, no small task. It’s hotter out there, away from the cooling effect of the creek, and so no apple trees were planted, only peach trees.

The soil wasn’t as rocky and the trees went in easier, but everything went downhill from there. The trees never really got established. They were short and stunted, pathetic little things. They produced very little fruit and within a few years we abandoned the orchard completely. A few years later the creek orchard was abandoned as well.

I’d say there’s some good reasons most orchards aren’t found in the middle of the desert.