Have you ever noticed how every year about early October tons of pumpkin-flavored crap suddenly sprouts up everywhere? Pumpkin coffee, pumpkin bread, pumpkin beer, pumpkin cookies, pumpkin gasoline—the list goes on and on. And that stuff hangs around and hangs around—like that nasty carbuncle on your lip you just can’t get rid of—until after Christmas. (Tip: do not click on that carbuncle link if you’re eating. Unless your computer/tablet/phone/whatever is barf-proof.)
Do you like any of that stuff? Do you know anyone who actually does?
The answer to both of those, unless you’re a freak, is no. No freaking way. No one does.
So why is there so much of it?
Two words. Pumpkin cartel. 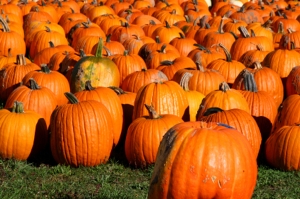 (random pumpkin picture, in case you already drifted off)

Yeah, and now you’re thinking, That’s silly. There’s no such thing as a pumpkin cartel. What kind of idiot does this guy take me for?
Well, first of all, I don’t take idiots. I have one and that’s quite enough, thank you. Second of all, the fact that you don’t know anything about the pumpkin cartel (PC) is proof of how powerful and dastardly they really are.
You see, they’re making a lot, I mean, a lot, of cheddar off pumpkins. And they won’t tolerate any threats to that sweet, sweet cash. So if they get wind of anyone getting wise to them, well, they just up and take ‘em out, Ichabod Crane-style (more on this in a moment).
First, we will disprove the lies the PC has spread about “pumpkins being a Halloween tradition.” We will do this by examining the origin of Halloween.
The Halloween we celebrate today is based mostly on the old Gaelic holiday Samhain. It was believed that on this day spirits could more easily come into the realm of the living. To make sure the people and their livestock would survive the winter, the spirits had to be appeased using food, drink, or crops.
That’s it. Nothing to do with pumpkins. What would spirits want with a pumpkin anyway? If you were dead, would you want a pumpkin at your party? No. You wouldn’t.
The reason pumpkins are part of Halloween is because of John Jacob Astor, one of America’s first truly rich people. In 1815 Astor inherited a massive pumpkin farm from his uncle. That farm annually produced approximately half a million pumpkins, or about one for each sixteen Americans at that time. Why his uncle grew so many pumpkins no one knows. He was doubtless deranged. 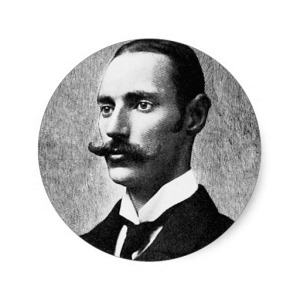 (picture of JJ himself. back when a steak dinner

So here’s John Jacob, got a half million pumpkins on his hands and more on the way and no idea what to do with them. A less-determined man would have just built a bunch of catapults and chucked (chunked?) those things right in the ocean, but JJ wasn’t one to give up. He was determined to find some way to get people to buy all those darned pumpkins.
It wasn’t an easy task. Just like today, no one liked the taste of pumpkins. He needed to find another use for them besides food. He tried turning them into furniture but that was no good. Too sticky. He tried turning them into shoes but they were too clunky.
Then, one day JJ was sitting at his desk with his whittling knife, trimming his fingernails (as he liked to do), a pumpkin in front of him, pondering his situation. Day turned to night and he still had no good ideas. In a sudden fit of rage, he went berserk on the pumpkin with his whittling knife, stabbing and gouging it again and again. When his fit of rage was spent, he noticed something that would forever change our nation for the worse.
There was a crude face carved into the pumpkin. A scary face.
A light bulb went on over his head. Scratch that. Too early for light bulbs. A torch went on over his head.
Scary face. Halloween. A marriage made in hell.
Halloween wasn’t much of a holiday back then, since most people couldn’t afford sugar and face it, what’s the point of Halloween without candy? But that meant he could easily break into the racket, push out the few chumps running it, and take it over for his pumpkins. Within a few short years you literally couldn’t call yourself a Halloweener (Halloweiner?) without having a couple carved pumpkins on your front porch. (Literally. He trademarked Halloween and if you said the word and weren’t within an arm’s reach of a pumpkin, a team of lawyers would swoop down on you out of nowhere and just litigate your ass from here to Kingdom Come.)
Fortunately, by 1820 at least one patriotic American realized what was happening and tried to warn the nation.
You’ve heard of Ichabod Crane, haven’t you? In the supposedly fictional story called “The Headless Horseman,” by Washington Irving, the hero is chased by a headless horseman. Ichabod flees across a river and thinks he’s safe, but the headless horseman throws his head at Ichabod and knocks him off his horse. In the morning, Ichabod has disappeared and all that is ever found of him is his hat lying by a shattered pumpkin!
Clearly, Irving knew about Astor’s evil plans even then, but was smart enough to know that if he came out publicly to warn people about them, something bad would happen to him.
That’s why he hid the warning in a harmless story!
Astor died a few years later under mysterious circumstances (most likely a pumpkin coup staged by his oldest son) and out of the ensuing power struggle the dreaded Pumpkin Cartel (PC) was born.
Not much interesting happened in the pumpkin world for the next 100 years or so. The PC consolidated its control of Halloween but didn’t do much expanding until its new leader took over in the 1920s. The new guy was a chap named Al Capone. Al got his start bootlegging during Prohibition and, while the money was sweet, he figured out early on that the real cash was to be made in pumpkins, not booze. 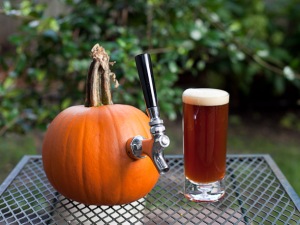 (warning: don’t try this at home! or anywhere, for that matter. pumpkins and beer are highly explosive!)

What he needed was to take over another holiday.
Before Capone came along, it was traditional to have a few nice zucchinis on your Thanksgiving table, or maybe some especially large turnips (turnips were very big in early 20th century America, before people realized how awful they tasted). Under Capone’s ruthless leadership, the PC made short work of the zucchini and turnip people who, let’s face it, were extremely poorly organized and also malnourished, especially the turnip people, who had to sit down and breathe hard every few steps and tended to burn easily in the sun.
With the zucchini and turnip people out of the way, things seemed like smooth sailing for Capone and his gang. Nothing to do but sit back and rake in the profits.
There was just one little problem: Bugs Moran and the Potato Syndicate. Bugs was an Irish mobster and he’d gotten the idea that the potato should be the official tuber of Thanksgiving.
All-out war ensued, culminating in the Valentine’s Day Massacre, where Bugs and his top lackeys were wiped out. When the dust settled, pumpkins ruled Thanksgiving.
Over the next fifty years the PC grew into a secret society on par with the Illuminati, complete with the crazy wigs and silly rituals involving members wearing live chickens on their heads while dancing the Charleston. But, as powerful and wealthy as they were, they were clearly a decaying, moribund society destined for the toilet bowl of history.
Until the 1980s when a little-known, mild-mannered fellow known as Bill Gates took the reins of power in a violent revolution against then-leader Kim Yong Il (also known for running North Korea for some time; I told you this was a vast secret organization) that ended with Kim saying “uncle” (in Korean, of course) and taking his henchmen and going home. 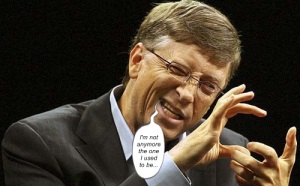 Gates, you see, had a wider vision for the future. No longer happy with just forcing people to buy a couple pumpkins and choke down a pumpkin pie or two (something no one, absolutely no one, would eat until whipped cream was invented), he saw a future where pumpkins dominated all the holidays. Not only would they be used as decorations, but people would eat them.
Everyone, even his own evil and quite nerdish henchmen, thought Gates was crazy. But he had recently come up with an idea for a product that no one knew they wanted or needed, called a computer. He knew that he could get these things into the homes and businesses of millions of people and through them he could introduce viruses directly into human brains. These viruses would have only one function: to suppress people’s natural gag reflex to eating pumpkin-flavored things. (Notice how the computers we use are called PCs? As in Pumpkin Cartel? Coincidence?)
And that is why pumpkin-flavored crap inundates our society in the last quarter of every year. Most people, addicted to their computers and tablets and smartphones, aren’t even aware of it. They just mindlessly accept it. Gates’ plan has worked even better than he expected, to the point that he had to quit his computer company a few years ago so he could dedicate himself full time to his true passion.
It’s time to fight back. What should we do? you ask. Honestly, I have no idea. I’m just a conspiracy theorist. I don’t have actual, useful ideas. I just know you need to do something.
Otherwise, don’t be surprised to see Santa wearing an orange suit one of these days.
(Borrowed from The Mad Mustache Conspiracy, written by me and my sons, Daniel and Dylan.)